Grilling is a favorite pastime for many, but it can be hard to know what type of grill to buy. Gas grills are popular because they’re easy and quick to use, but some people worry about gas grills blowing up when they cook with them.

In this blog post, we’ll talk about whether or not you should worry about your gas grill blowing up while cooking on it and how to prevent this from happening if you do have a gas grill. 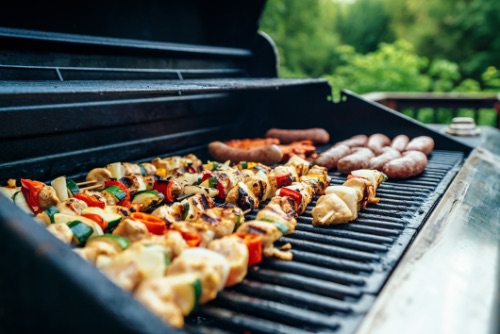 Though propane grills are generally safe when used properly, they can explode due to the gas valve being left on or from a flame. The increased pressure inside of the tank is also something that needs to be considered and careful attention should always be paid in order for it not lead up too an explosion.

Is a gas grill at risk of exploding?

There is a small chance that propane tanks will explode and cause death. But it is not very likely. It would only happen if the right conditions were met. The same risk of dying in an airplane crash is about 1 in 37 million which means that this doesn’t happen often, but can still happen.

For most people, if your propane tank is hooked up to your grill, and both are in good working order, you are not likely to see any issues or explosions. But for those of us who have gas left on or experience extreme heat around the tank, then there is a chance that we will see an explosion.

Why do propane tanks explode?

Sometimes gas builds up inside a tank when the valve is left open. If you have a grill with flames on but no fire, then there could be gas in the grill. When you go to light the grill again, it might not work because of all of the gas. This is less likely to happen and an explosion is unlikely because of how much gas would need to build up in order for that to happen.

Another type of propane tank explosion is called a boiling liquid expanding vapor explosion or BLEVE. A BLEVE happens when there is extreme heat around the propane tank, such as fire. When this kind of heat touches the propane, it starts to boil and expand.

When things are boiled, they let off vapour. Without a place for the vapour to go, it builds up and creates pressure. If there is no space for the pressure to go, then eventually that container could explode.

If there is a lot of pressure in the tank, it could explode. To avoid this, tanks have valves that release some of the pressure when they are too full. But remember, you still need an ignition source to cause an explosion.

Is my propane tank going to explode if it gets too hot?

It is not easy to find the temperature that will make your tank explode. A general guide says that the pressure relief valve starts opening when a pressure of 375 psi is reached. So it would need to be 160°.